Reflex and red dot sights have been mounted various way on pistols for years. None were inexpensive. When Glock introduced the MOS (Miniature Optic System) idea, I instantly saw several advantages. By building a system into the gun no bulky add-on mounts or expensive slide cuts that voided the warranty and only fit one brand of optic. I wear bifocals and with a reflex sight, you focus on the target and the “red dot” is in focus too. I was hoping this would speed up my target acquisition significantly.There are numerous articles as to sight alignment. The basics are, focus on the front sight and the target is blurry, body alignment only works to certain distances.

In an earlier article I spoke of purchasing my G19 MOS and attempting to install what turned out to be a fake Trijicon on it.

Just as a recap, the fake one’s base was / is different than a factory one so it did not work.

In the long run, I purchased a real Trijicon and installed it on the Glock in July 2016. At the time I remember thinking that the screws seemed like they would barely thread into the mounting plate. Regardless, I added blue lock tight, went to the range and sighted it in.

After several 100 round maintenance drills, and several Bill drills, scattered over time, all seemed well. In October 2016, at a local USPSA shoot, the 2nd to last stage, the optic flew off and in front of the muzzle. It went straight up and over, in slow motion.

Fortunately, I did not shoot the sight. Unfortunately, I could not find the screws amongst all the rocks. The base was still firmly mounted it was the site that came off.

That evening, I checked the local hardware stored and could not find any the same length and thread, only longer. While trying different screws and lengths I stripped the base that came with the Glock for Trijicon.

I continued to test and use the gun just with the “normal” sights until July 2017 when I ordered a complete new set of bases from Glock. I had been hoping to only order the Trijicon base, no such luck. At the same time I found that lots and lots of people were having issues with the Glock supplied screws being to long or to short (there are 2 sets included with the weapon). There were also numerous complaints that the battery was not being held tightly and thus the site would go off and on during recoil.

After failing to get the sight to install correctly again, research (aka DuckDuckGo.com) helped me find a company that provided a very thin plate that was not quite flat, and included screws that were the right length. The plate was raised just enough at the battery to put pressure and hold the battery in place. The company, Battle Werx, was the only one who had a way to solve this problem. I bought two.

These days, you can get similar products from Trijicon directly , on Amazon, and I am sure other places.

With the new base, the anti-flicker plate and screws the mount was tight. Over the last year there have been no issues with the sight coming loose and no flicker of the sight.

I have since added the Gen 4, Glock 34 MOS, with the ant-flicker plate, and another Trijicon as a USPSA / IDPA gun. My desire is to use both enough that I can transition away from my CCW with “normal” sights and to the reflex system.

If you choose to get the MOS series with added reflex sight, it most likely will require new holsters, or modified holsters, depending on your use. This applies to the other brands of pistols that have similar setups for adding reflex sights. 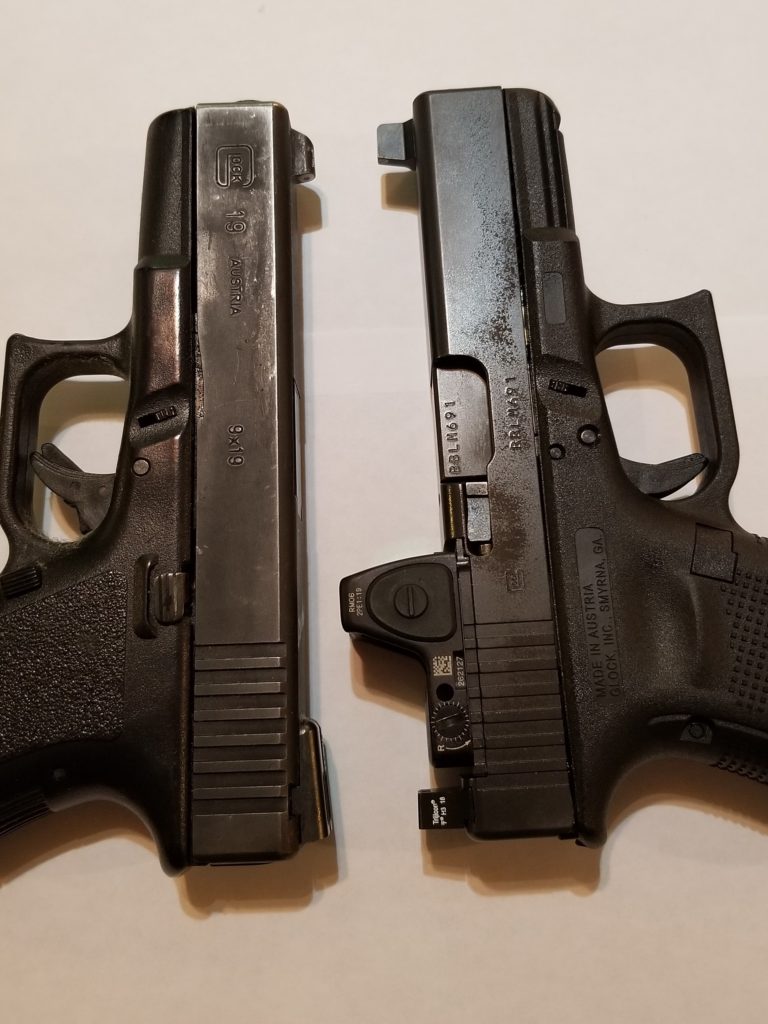 My USPSA holster from www.AresTactical.net fits the G19 due to its cut, it was designed for a G17.

However my Crossbreed Supertuck is cut higher up, I either need to “modify” the holster by trimming some of the Kydex or get another holster, which I most likely will do.

For me the Glock in MOS configuration was and is worth it. It was just my bad luck to end up with the one site (Trijicon) that was not quite setup right from Glock. Other guys I have shot against at IDPA and USPSA shoots who have other brands of reflex sights have not had any mounting or stability issues.

Until we meet again, keep your booker hooker off the bang switch until on target and ready to fire.

One thought on “Glock 19 MOS another life adventure”