My wife is ill so I’ve taken over the cooking duties, a skill previously unknown to me. For the last 65 years, at mealtimes—poof!— it never failed—food magically appeared on my plate.  So I assumed food was a biblical manna thing, or maybe it came from some kind of a government airdrop.

Fortunately, there are all kinds of cooking shows to learn from on cable.  And being a chef can be quite a glamour job if you have a certain ‘star’ quality and are known for some specialty.

For example, there’s chef Anthony Bourdain.   His specialty is getting naked with his sexually ambiguous friends on the internet.

Then there’s Giada DeLaurentis, who was born to prepare food on television.  You’ve heard of the hundred-watt smile?  Her smile could power a nuclear submarine out of drydock.

She not only brings joy to the room, her smile spreads love and pixie dust all about.  Every time I see it I’d like to whisper a little something in her ear.

Finally, there’s Bobby Flay, the most popular guy in the cooking network high school.  I like Bobby Flay. And when he married lovely actress Stephanie March of Law and Order fame, I envied him. He had the perfect life.

Unfortunately for Bobby though, the marriage failed. Lovely Stephanie turned out to be as nutty as a Paula Deen fruitcake.

My only beef with Bobby Flay is that whenever I cook using his recipes, everybody hates me because I either burn the food or drop it on the floor.  So his recipes really aren’t any good.

So anyway, one night last week I ask the wife what she wants for dinner, and she says mac and cheese.

Now I’m pretty stoked because I can see myself on Top Chef, schooling Tom Collichio and Padma McGoofyname on the ins and out of melting cheese and boiling macaroni.  But since they’re not around, I start mansplaining to the little woman in my best Julia Child french. 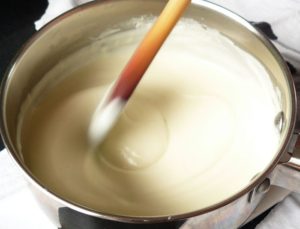 “Then I put in some cream and milk.  That makes a bechamel sauce,” says I. “Be-cha-mel.  Repeat after me, sweetie—be-cha-mel.” 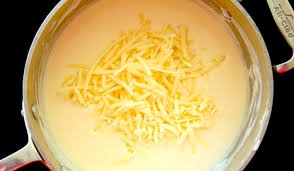 “Then I throw in some cheddar cheese.  That gives me a delicioso mornay sauce,” says I. “Mornaaaaay…”

“I want the stuff in the box,” says the wife.

“I want the stuff in the box.”

“Mac and cheese…from the box?”

“Well, mac and cheese in the box is just…stuff in the box.”

“But that’s silly.  If I make it from scratch, it’s so much better…”

Well, pooh on you, Bobby Flay.  It’s tough to admit my wife hates my cooking, but I’m not too proud to learn a little humility.

Naturally, right now, though, I’m a little down and I could use some cheering up.  I hope there’s someone around who’ll pat me on the back, give me a little smile of encouragement, and buck me up a bit.

Until we meet again keep your booger hooker off the bang switch until on target and ready to fire.

And if you need ink or toner for your home or business, contact Dan because Dan is the man, if he can’t do it, no-one can!