In June of 2014 I wrote my original articles on my visit to XS Sights. Yes, I just published them here in May. In this report I want to go over my results of using them for all 2015.

Early winter 2014 I installed a set of XS big dot sights on my Glock 19. I chose to install them myself though, as I noted in the first article, one could mail their slide to the XS factory in Ft. Worth and have them installed. I had previously bought their AR front sight, three actually. I will have to get you a review on those soon.

Boy is the front sight nice and big! It was easy to acquire in my dry practice for my eyes. If you recall from my 2nd / Part 2 article on XS sights, Stephanie told me green was used because it is in the middle of the color spectrum. There is also something I was told by Paul Markel of Student of the Gun fame. That is as it gets darker, we lose color perception, and colors fade to black and white only. Sure enough, during blackout practice the front sight, thanks to the glow of the Tritium reflecting in that big hunk of white, stood out. 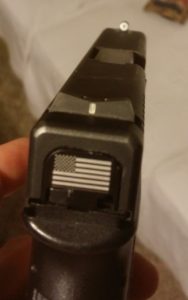 Since it was the end of 2014, I only used them for a couple of 50 round and 100 round practice drills. This, of course, did / does not include my dry fire and draw practice routines. Lining up the “popsicle” as recommended by Stephanie, took a little getting used to, however my shots went where I wanted them to out to 20 yards. After that I had to take a little more time lining up the sights. I have been using the Glock Factory and 3 dot night sights since the late 90’s when I purchased my first Glock and Sig, so “break in” for me was to be expected.

In the first part of the 2015 year I continued my practice and in March went to my first IDPA shoot with these sights. I did not do as well as I had in the past. I decided right then and there I needed more practice. My times were a little slower and I was a few more points down, add those together and I got a little discouraged at my scores.

Along with my practice, in May I took a one day R.E.A.L. Defensive shooting system handgun course from Canovi and associates. I passed the final exam without issue. All shooting at this class is 20 yards and under. I felt I was getting better with the new sights.

In June I took a two day Tactical Handgun 1 course from the APT Academy. I shot miserably. Rounds were hitting all over the place and accuracy sucked. Just to be sure there was nothing wrong, I made sure the sights were tight and accurate, the weapon was clean and all parts were tight. In slow, controlled fire things were “right”. I just was not aligning up the “popsicle” correctly.

Later that month I shot another IDPA shoot, to say I did terrible would be an understatement, my times were horrid and points down were that of a blind man, no, a blind man could have done better.

Back to the practice range to figure out exactly what was going wrong. Two things I figured out. First I was not aligning up the stick to the dot. That is the rear sight and front were not lined up when I had to make further shots. My natural, or really trained, point of aim made shooting at 10 yards and less unnoticeable, from 10 to 20 yards, my times slowed down and I had a few low or high shots, due to misalignment. I lost the “stick” in the dot or left a micro gap that I could not see. I wear bi-focal glasses, I cannot focus well on the rear sight regardless. I have learned or taught myself over the years how to “see” the 3 dot system by focusing on the front sight.

The “popsicle” stick just was too blurry. The more distance you add the worse it was. Added to that, if it was a little left or right, I could not tell, so my shots were going everywhere under duress at 15 or more yards.

From that point in time, I picked up to practicing only the 100 round workouts, no more 50 round ones. I was going to train my brain how to use these sights!

Hundreds of rounds later, October came and I decided to try my hand with Canovi’s REAL Defensive class again. So long as I went 80% my normal speed, I was just fine. I decided for the final exam to run at 100%. FAIL! Tried it a 2nd time, FAIL again. The third time I ran it at 80% and passed. To be sure it was not me, I pulled out my G26 BUG with Truglo Tritium / Fiber optic TFO sights. I was able to blow through the test at my normal “full” speed.

In early January of this year, I ordered a set of Truglo Tritium / Fiber optic TFO sights for the G19. Before you call me a quitter, I did spend many hours, hundreds or even thousands of rounds with the XS Sights, giving them a full year of workout. They just did not work for me. With that self-doubt, I could not put myself or my family in danger of a missed shot during a fatal encounter. My life and that of my wife and children is not worth it.

What I chose to do instead of replacing the whole set, was to replace the rear sight only, giving me a 3 dot set, with the “middle” aka front sight, being the large white one.

After a few days of dry practice it was off to the range for a 100 round workout. Wow was I excited, I could quickly run my gun and not my mouth! Since there were no scheduled IDPA shoots near me, I had to wait until another Canovi REAL class came up, in March I took the training. I was able to blaze through (for me) the class and final exam, passing the first time. My confidence was restored.
Then the last week of April, I was able to take the Strategos 4 Day handgun class. Shooting just over 1,050 rounds I never felt my sights were an issue. I do admit by the end of day 4, I was a bit if the issue. My shoulder was killing me from drawing so many times that I did pull one round that made me think “What did I do there!” Other than that, I absolutely love this setup. Two Tritium green rear sights that do not overwhelm the large XS white front sight. Looks like I have a new standard to use. 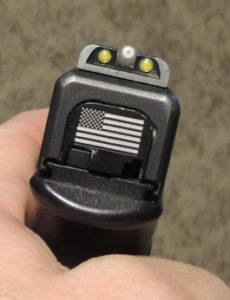 Until we meet again, keep your booger hooker off the bang switch.

One thought on “XS Sites, the final stage!”