Since CrossBreed holster have taken flight, many existing holster companies have tried to imitate and many new holster manufacturers have started, using the basis of the CrossBreed as their main holster.

Gold Star Holsters LLC is one such company. While CrossBreed holsters is located close to me in Republic Missouri, Goldstar is even closer; they are located right in my hometown of Nixa Missouri.
Trevor, the owner of Gold Star Holsters, says he gives a percent of each sale to the “Lone Survivor Foundation”, this shows a charitable heart, a great quality in a businessman if you ask me.

Each holster is made to order. With that in mind a couple of the guys on our church safety team had holsters made for their handguns. Neither are experienced CCW holders but each does have a completely different background and reason for carrying a concealed weapon.

I let these guys use their holsters for just over 90 days before asking how they liked them; both gave high remarks and no downside or complaints to their holster. With that info in hand, and the fact that I know the owner (though we are not tea drinking buddies). I went down with my wife and met with Trevor and his wife, discussed my needs and ordered a left hand, Glock Gen 3, full size holster for the 17, 22 and 31 size handguns. Since gen 3 Glocks have a rail, I made sure Trevor knew it, just in case it made a difference in making the holster, and it should.

The holster was made of cow hide, horse hide was not, and at this time does not appear on their site as an option. I also went with basic black. The Gold Star web site offers a large variety of colors. As for me I like my guns and gear black, black Glock, black AR, and black bags. Just my likes, unlike my buddy Todd, if you want to sell him any firearm or accessory, have it in “tan” (Coyote, desert et al) and my friends over at OnTargetMagazine.com the Battle brothers like grey or foliage / OD, so to each his own.

I was given a discount and paid only $45 before tax. Right now they are listed on the site for $49.95, $59.75 (they went up since I originally started this article) friendship has its perks. As you noticed this is significantly less than what a CrossBreed cost (Approx. $77.25 for the same holster).

Gold Star offers a lifetime warranty, if you don’t like your holster or it breaks, they will modify, change, repair it, or do what is necessary to make it right. A nice touch and what should be expected of every business these days.

About a week after ordering I received an email that my holster was ready. There were several things I noticed right away. First the hide was about ½ as thick as my CrossBreed, and the Kydex was also only about half as thick. I also noticed that the belt loop / clips were not as tuckable either.  This holster had the “combat cut” standard, which I prefer, I get a better grip on the gun with this type of holster, this aids in a quicker, smoother and correct draw for me.

My Glocks all fit snuggly, jumping up and down, doing squat thrust and doing some wind sprints did not dislodge any of the weapons I tested (Some had the accessory rail some did not). I did this test with a three sizes of Glock and both railed and non-railed versions.

I tried to wear this holster off and on during mid-April through Halloween. I tried to wear it daily but it was just too long and with the angle it pinched my butt cheek. The image you see above is not my holster, I forgot to take a picture before asking Trevor to help with the pinching issue. The one here is from their web site. As you can see they enclose the tip of the barrel, this helps prevent the front site from snagging when being drawn and also is supposed to help prevent the gun from popping out of the holster if you sit down and the barrel catches on the arm of a chair. Unfortunately for me, the angle of the holster and length just were too much, sitting and standing were uncomfortable. Walking around was only slightly better. Again, I blame this all on the length.

As I stated earlier Trevor give a warranty so on Halloween I met with him, discussed what was happening and we talked it over. He suggested shortening the barrel part of the Kydex. With that I left the holster with him and a few days later an email let me know it was ready. I picked it up but did not immediately start wearing it. I wanted to finish my review of the CrossBreed holster (you can read it here http://www.the22man.com/2016/03/crossbreed-supertuck-holster-review/).

When Trevor shortened the Kydex, it appears (see the image) that he also moved the Kydex higher on the leather. This did allow me “more room” when tucking my shirt in. So the month of December I began wearing the holster again, and this time, I told myself I had to wear it every day.

The holster had lost all of its form to my body by December, and even after one full month there was very little “forming” of the leather to my body. As I mentioned in a previous article I was worried about this with all leather / Kydex combo holsters, figuring the Kydex would keep the hide from fitting. As a result, every time I put the holster on I have to force it around my hip.

I also have difficulty installing (geek word!) the holster on my hip. Both before and after the modification, the end of the Kydex that gets tucked in first constantly catches on my belt / pants when putting it on. I also have to wear this holster farther back, more towards the 7 o’clock than the 8 o’clock position, and defiantly not at the 9 position. In any of these 3 positions it is difficult to draw the weapon, I have to tweak my shoulder back more than I am used too and then the draw is uncomfortable. As a reminder, I am left handed, so this should be a smooth easy draw for me.

I tried to adjust the clips since there were multiple holes pre punched in the leather. No such luck, no matter how I tried to unscrew the screws they just would not come out. I tried putting pressure on the “rivet” / female / nut, putting pressure between the hide and Kydex and just could not budge it. I even had a friend who makes Kydex only holsters (we were hanging out) give it a try. I think if I could turn the angle of the Kydex to more of a straight up draw compared to the 15 degree cant I might have fewer issues putting it on and drawing the handgun. 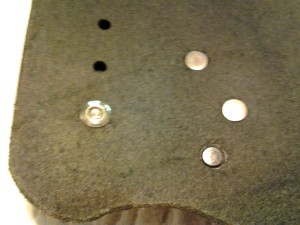 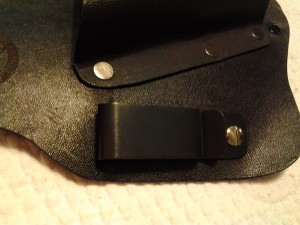 Lastly I wanted to talk about the belt clips. Though they are designed for tucking your shirt in, and they are deeper than the first ones I had on another holster, they just are not deep enough. The tucked shirt looks really bunched up around the holster. I don’t like it when one side of a shirt is tucked nicely in and the other side bloused and scruffy. And of course, though all tuckables are this way, I still cannot stand that all clips are black (ignore my earlier comments about black – it does not apply here), we need tan and brown to match the various belts we wear. Better yet, IWB holsters used to have “J” hooks that went between the belt and pants with just a small amount of the “J” showing as it came under the belt.

One final comment, since I am left handed, I have worn the majority of the time left handed holsters in my car. I placed some pictures of what the right side of my car seat looks like after wearing the right hand holsters after my surgery. Here you can see what happened to my seat only after I started wearing the Gold Star holster. Maybe a lot of it was a result of the length that I had to have cut off but the need to wear the holster farther back also causes the butt of the Glock and its magazine to stick right into the seat. 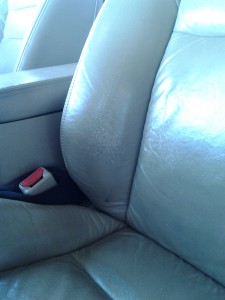 Until we meet again, keep your finger off the booger hooker