As a long time advertiser on the Gun Show Radio, Christmas 2012 Matt Canovi gave me a gift of any of his Custom hosnaplsters I would like.

The holsters are made by Gaunt Leatherworks in Springfield Missouri. The first week of January 2013 I went by Gaunt and spoke with the owner Tim Gaunt and told him what I wanted, which was the Custom Elite 2-piece detachable holster for my 1911. I figured that since I had not worn my 1911 in a while this would be a good time to do so again, plus it gave me a good reason to see how a different firearm in a different type holster would feel.

The holster allows ½ to stay on the belt and the gun to be removed but still in a sheath covering the trigger and barrel, helping to prevent negligent discharges. 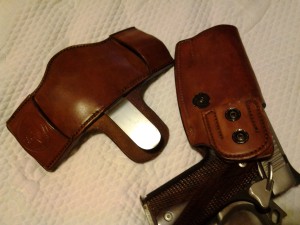 Why would I want this type of holster? Well, even though I don’t disarm myself for plastic signs on doors, I do visit the County Emergency Department a lot, I am a CERT (Check out my previous articles on that here). Our county building has the metal detector so every time I go in I have to strip my “bat gear” off, knifes, fire, magazines, handgun, less lethal… a total pain in the neck. This holster makes removing the weapon easier, quicker and safer, in my opinion.

Since these are custom made holsters, I had to wait three months for mine to arrive. The holster was made of a heavy and thick leather / cowhide. 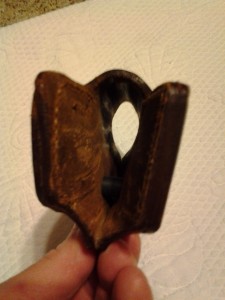 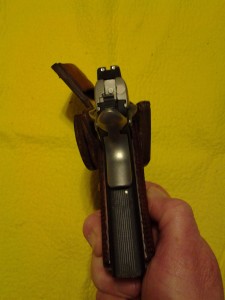 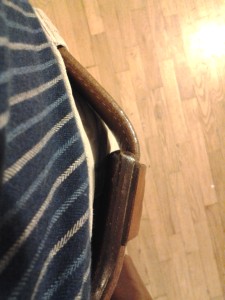 It is not light in weight be any means, however within the thickness of the holster lies a metal support, this adds thickness and weight and durability.

As a result of being thick the weapon did not conceal well under a coat if I crossed my arms. 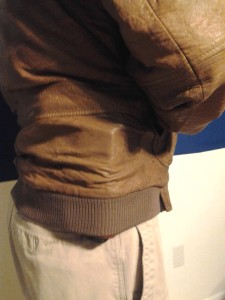 Even though it is a “high rise” holster, it also hung below my jacket when I reached up as if scratching my head. 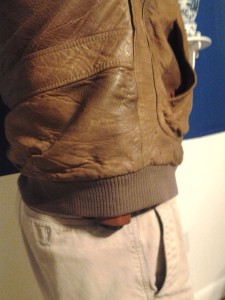 The holster is single stitched with a very thick stitching. 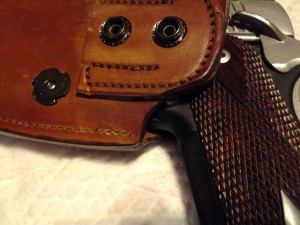 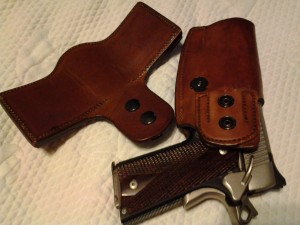 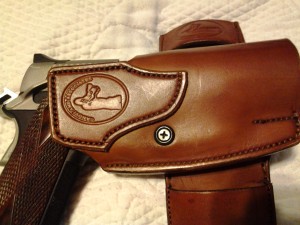 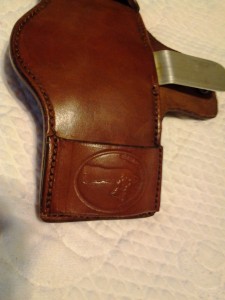 As you know by my other articles, I was well into other reviews by the time this one arrived. I only tested the holster over a weekend 2 or 3 times until January of 2014. I wore the holster 3 days before I noticed a critical flaw and as a result went to wearing the SoB DeSantis holster that was reviewed here.

What happened was the holster pressed on the magazine release and popped the mag out. The magazine stayed in the firearm but was not locked in, creating a 1 shot weapon and something I was not willing to risk my life on.

Since I had Matt’s cell number I gave him a call. He had not heard of such an issue but wanted to meet with me and Tim with the holster. Unfortunately the day we were to meet, Matt could not make it, however I did talk with him and then go see Tim. Before this, I felt the issue was how the holster touched the magazine release and that turning and twisting my body in everyday use caused the firm leather to press against the button. Tim felt this could be the issue also. While neither Matt nor Tim had any other complaints, Tim took it seriously and immediately, while I waited, ‘shaved’ some of the leather off. I did not have my 1911 on at the time so I could not test it, however Tim did with his. 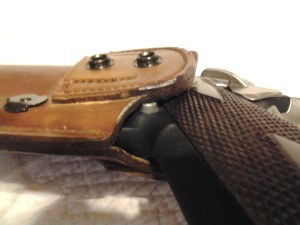 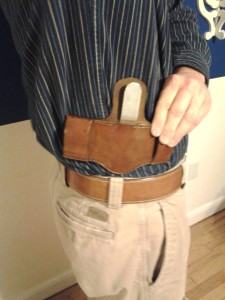 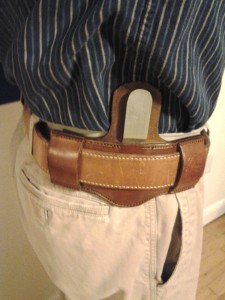 This causes you to “lose” one belt loop and as a result the entire rig pulls down on my pants. I was unable, on any of my pants, to get the belt part to go in-between two belt loops on my pants, not at the 1, 2, 3, 4 or 5 o’clock positions. I hate it when my pants pull down on one side, even though others may not notice, I feel it, this causes me to ‘adjust’ and pull up on my pants which causes (possibly) others to notice something I am doing. 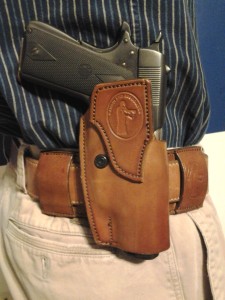 My Kimber CDP has a dual safety release, during the time of carrying the safety was never accidentally clicked off, probably because the overall weapon was kept away from my body due to the thickness of the holster. My full size Colt has the military safety and of course was never an issue since it is so much smaller than the Kimber. 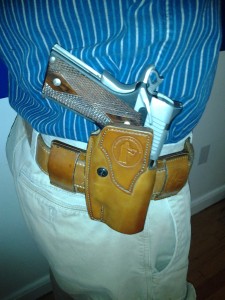 The holster is designed to make the firearm ride high on the hip. This allows easier drawing when seated, especially in a car. The seatbelt is not an issue, though the seat is. Holstering the handgun was easy and smooth and of course a one handed operation, just as it should be.

The draw stroke caused the holster and belt to rise up before the 1911 was released, I believe this was caused by the skipped pants belt loop as described above. This did cause my draw to take almost twice as much time as when I draw my Glock from the CrossBreed holster.

The holster still trips my magazine release, a 2nd visit to Gaunt Leatherworks did not resolve it. So the holster is in my ‘box of holsters’ for my safety and confidence.

Until we meet again, keep your booger hooker off the trigger.