Because of all the brouhaha surrounding the visit by Pope Francis, there are a lot of new pope books out there.  Here’s an older one you might have heard of.

The title is inflammatory and unfair, but the book does present a fairly accurate picture of 1930s Europe and the terrible quandary Pope Pius XII and the Catholic Church found themselves in. 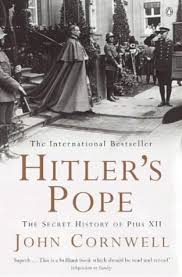 Entitled Hitler’s Pope- The Secret History of Pius XII, author John Cornwell accuses Pius XII, the pope during WWII, of complicity in the holocaust for not doing more to stop the Nazis.

And on the face of it, he appears to have a point. Because there’s nothing the Nazis feared more than the pope’s personal martial juggernaut, those snappily dressed military clothes-ponies known as the Swiss Guard.

The book’s most serious charge is that Pius XII actively promoted Hitler in his rise to the top.  I find the assertion simplistic and silly, but there’s a sure way to uncover the truth.  Let’s call hell and ask Hitler.

Hitler’s rise took place in the 1930’s but the formative years of this pope occurred years earlier, in the aftermath of the Russian revolution.  At the time, Pius XII wasn’t yet pope.  He was still Cardinal Pacelli, papal nuncio and right hand man to his predecessor, Pope Pius XI.

The trouble started in the 1920’s when Lenin and the communist party, now in control of post-revolution Russia, dispatched kill-squads to hunt down and murder anyone involved with the church.  Thousands were massacred.

Government sanctioned terror is straight out of the Marxist playbook.

The most basic tenet of communist ideology declares the State is the source of all authority.  No other can be allowed to exist.
Anyone who’s read Marx knows this, though there are tons of pseudo-intellectual potato-heads around who think different.  Matt Damon.

If you still doubt what communism is really about, fast-forward to 1924 when Plutarco Elias Calles, a self-professed communist took power in Mexico.  Like his Soviet forbears, the first thing el presidente communisto ordered was—wait for it— the murder of all priests.

Or move ahead to the 1930’s and the Spanish civil war.  Whenever the ‘republicans’ (communists) took over a town, what was the first thing they did?  Hang all the priests.

So what about it, Senor Potatohead?

Thus, on several occasions, Cardinal Pacelli stood helplessly by and witnessed first-hand the communists’ premeditated mass butchery of priests, nuns, and simple Christians, all employees or compatriots of the church.

Meanwhile, communism was gaining momentum.  1930s economic chaos in Germany resulted in anarchy on the streets as the German communists, the largest communist party outside the Soviet Union, sent thousands out to riot and pillage for the violent overthrow of the tottering Weimar government.

Fearful for the survival of all of Christianity, the pope decided the Catholic Church in Germany could only stymie the communist threat by allying itself with someone unafraid to stand up and take the fight to the streets.  Someone bold, and brave, and just, and…

To be fair, up to that time, the Nazis openly proclaimed their pro-hatred beliefs, but unlike the communists, hadn’t been around long enough to prove they really meant it.  Hitler, not yet in absolute control, was cleverly biding his time, no doubt whispering in the ears of hesitant church leaders that they should cast their gaze to the east.

There they could watch yet another Soviet theater of government sanctioned murder—a horrific reign of terror that would end with seven million Ukrainian corpses.

And once unleashed, the Fuhrer proved he was a man of his word.  In exchange for the Catholic Church taking itself out of German politics (Catholics had been saying nasty things about him), he did his part.  Within one year, all communists in Germany had been driven underground, imprisoned, or shot dead on the streets.

Ironically, Hitler would happily have killed all the communists without any encouragement from the church.  But now, seen by the German people as a strong leader with church backing, he secured unrestrained elective power.  Naturally, after this, any church complaints or claims of disgust as a result of future Nazi atrocities would ring hollow.

Thus, fair or not, the accusation that Pius XII was Hitler’s pope.

Post-war, however, the church slowly regained its influence and didn’t forget its experience with communism.  All of the popes through the polish pope, John Paul II, were staunchly anti-communist.  In the early 1980’s, John Paul II even stood with Lech Walesa and the Solidarity Unions of Poland which contributed mightily to the fall of the Berlin Wall and the ultimate collapse of the Soviet Union.

Which brings us to the current Pope Francis.  It’s easy to see why the church selected an Argentine. Over the last thirty years, European Catholicism has lost out to European secularism and is dying.  It’s said that church pews are almost always empty except at Christmas and Easter.

In South America the church is far more alive, though its history, and thus its teachings are far different than Europe.  In other words, it’s a far different church.

Big on so-called “liberation theology”, much of what Latin American Catholics are taught is tied to an interesting vernacular.  Perhaps you’ve heard some of this before.

Liberation theology states that the cause of Latin American poverty is the result of oppression and imperialism committed by the capitalist countries of Western Europe and the U.S.  And the key to overcoming this poverty is redistribution of all wealth.

If you’ve heard those words before and that line of thinking is familiar to you, then you probably know liberation theology by its real name—communism.

Well, until he can stir up more controversy, that is enough for Dan.

Until we meet again, keep your powder dry.